When I saw this amazing blog post by Geoff Boeing I immediately wanted to do the same thing for some cities of my choice (and to play with the great tool that is osmnx). I strongly suggest reading the mentioned blog (and the follow up one mentioned there) before going further.

Setting up the environment is easy - this post describes how to install and use osmnx and there are a lot of examples in the form of Jupyter notebooks here. This particular one was used to create the city street orientations images, although I used a script because I found it easier. You can see the script here1. 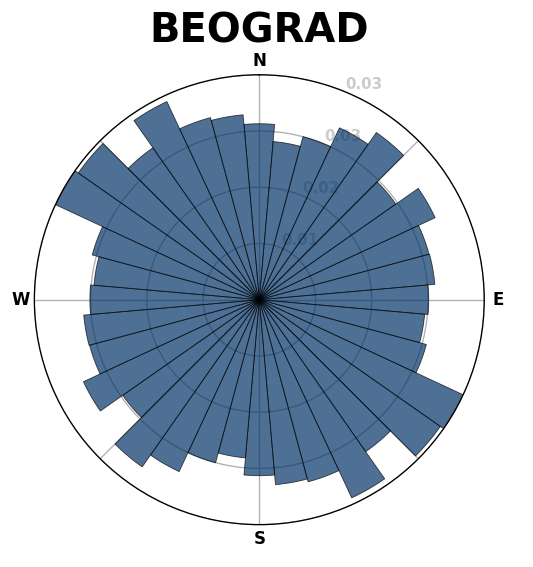 After that I decided to get the street orientations for all major cities in Serbia. Since there are a lot of cities I divided them into a couple of groups2. 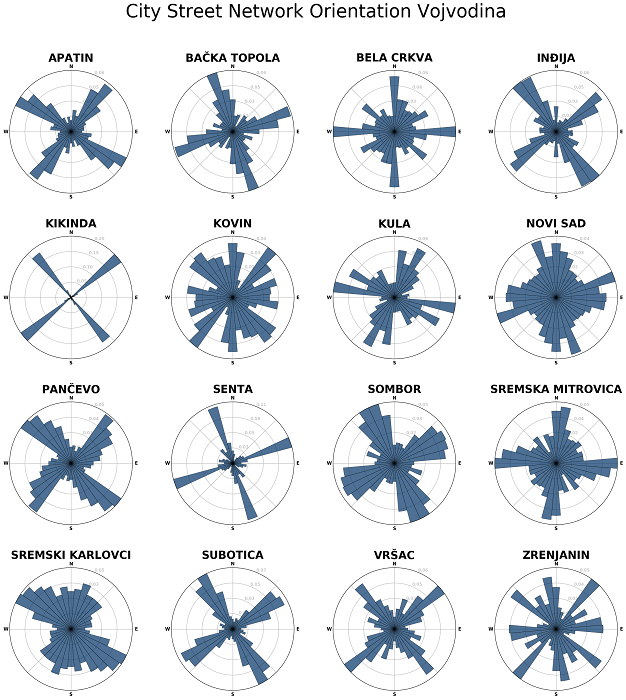 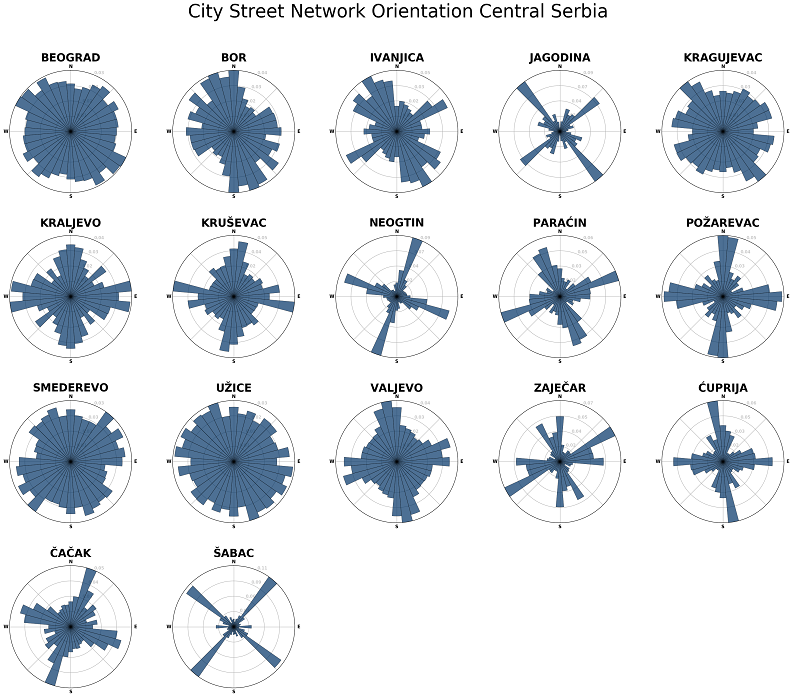 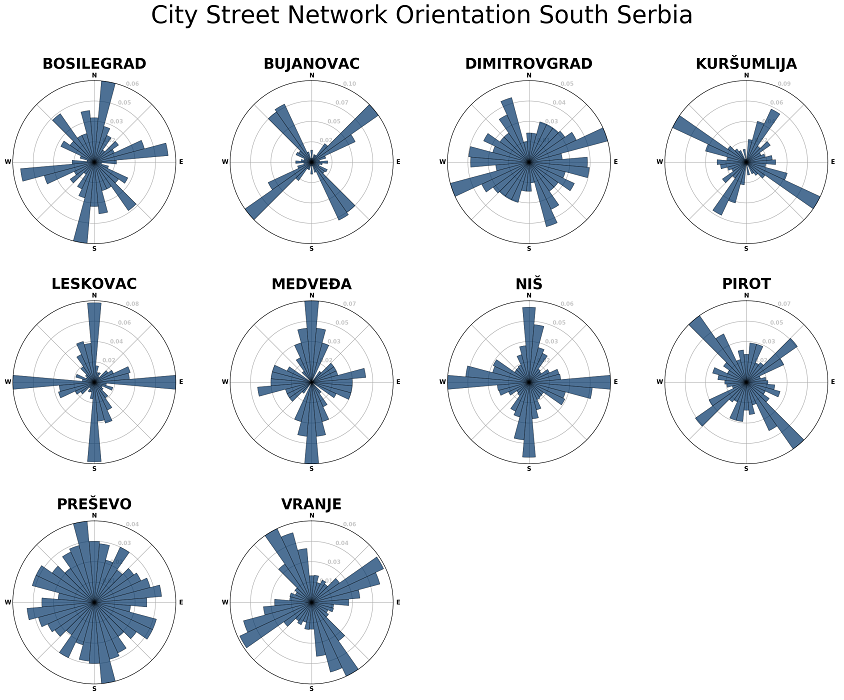 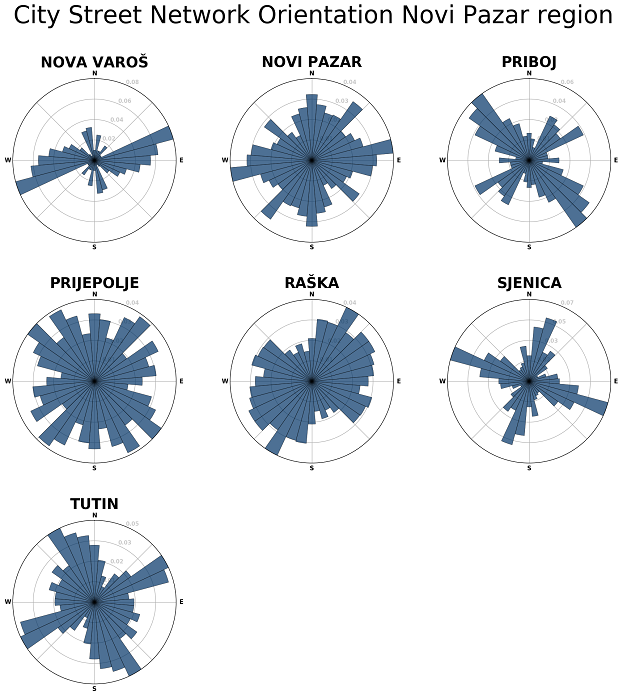 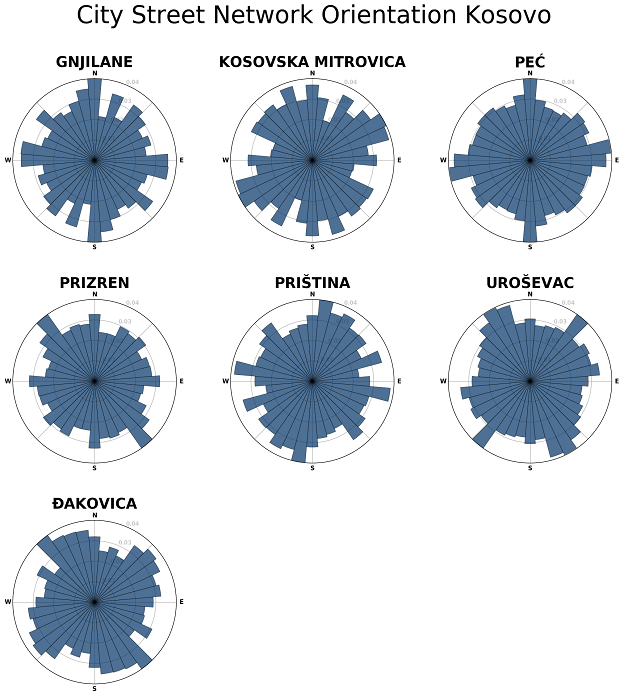 Serbia is a land with a really unique geography and really unique sequence of events that happened throughout its history. Various geopolitical moments had impact on all aspects of human living and doing in the region, one of them being the way cities were built. Layout of the city streets is different for almost every city which can be seen by the pictures in this post. I’m certain that it is possible to find a connection between people who lived there, geographical, historical or political moments and the particular ‘shape’ that one city has. To me this is a very interesting topic for a research.

I’m not trying to be the ‘here is the data, I’m done, now someone do the research’ guy, but at the first glance, there are not many resources online that tackle the question of urbanism in Serbia so it is really hard to find any data to run this images by. But, there are quite a few books written on the subject and I will try to check them out although it could take some time. I will post anything that I find here. Meanwhile, I hope that someone also gets inspired to conduct any kind of research (or they already did which is great). One thing is certain - osmnx is the tool for the job.

Thanks to Geoff Boeing for the inspiration. :-)

1: You may notice that for some cities I had to query for ‘municipality’ and that’s because towns were not available on their own. Municipalities include a wider region than the city so this arguably could have had impact on the end results.⏎

2: Division was not based on any political, religious or ethnic criteria, I just found it easier to do it this way.⏎